Decades high inflation and interest rate increases by global central banks to combat that inflation were key factors that drove the heightened volatility in financial markets during May.  Examples of the high inflation rates include the U.S. producer price index (PPI) rising 11% over the prior year and the consumer price index (CPI) coming in 8.3% higher.  The German PPI rose 33% due to high energy prices.  The CPI in the United Kingdom rose at a 9% rate, the highest in 40 years.  The euro zone CPI came in at 7.4% higher than the prior year, up from 5.9% a month earlier.  In response to these high inflation rates, several central banks raised policy interest rates.  The U.S. Federal Reserve Open Market Committee (Fed) raised its fed funds rate by 0.50%, the largest rate hike since 2000.  The Fed also indicated hikes of a similar magnitude are likely in June and July.  The Reserve Bank of Australia raised its policy rate for the first time in more than a decade.  The Bank of England raised its policy rate to 1%, the highest level since 2009.  Brazil, South Korea, Poland, and Mexico also raised rates in May.

Concerns that high inflation and the higher interest rates to combat that inflation will slow economic activity and pressure corporate earnings sent stock prices lower for most of the month.  The rerating of equity valuations during May was especially painful for growth stocks which declined on expectations for even higher interest rates reflecting hawkish comments by central banks.  For example, Fed chair Powell’s comments that the Fed would act aggressively if inflation does not ease pushed stock prices down.  Disappointing earnings reports from retailers Walmart and Target citing higher costs raised investors’ concerns about future earnings and further pressured stock prices.  During the last full week of the month, major equity indices snapped the multi-week losing streak with a gain.  The Fed meeting minutes indicating that the Fed intends to limit rate hikes in June and July to 0.50% and positive outlook comments from JP Morgan’s chief executive officer eased investor concerns, at least temporarily. 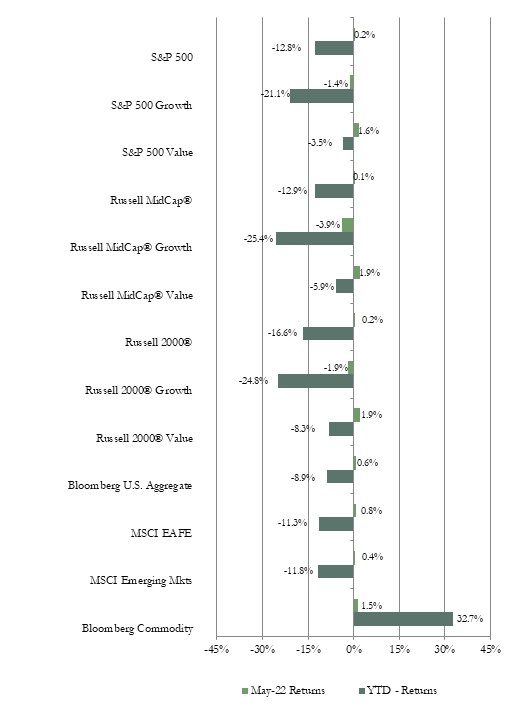 Major U.S. equity indices eked out a small positive return after the late month rally.  The value sector of the S&P 500, Russell MidCap, and the Russell 2000 indices each posted a positive return and outperformed the negative returns for the growth sectors.  The positive value sector returns were driven by the energy sector.  Energy was the best performing of the 11 sectors in each market capitalization (cap) index and the only sector to post a double-digit gain.  Other value sectors, such as utilities and financials, were also top performers.  Growth sectors, such as consumer discretionary and information technology posted negative returns and were among the weakest performing sectors hurt by rising interest rates and disappointing earnings reports.

Both the MSCI EAFE index of developed international country equities and the MSCI Emerging Markets index (EM) outperformed the U.S. equity indices on a U.S. dollar basis.  The EAFE and EM indices posted a small positive dollar based return, but a small negative return on a local currency basis.  The dollar based returns were higher since the U.S. dollar index weakened against several major currencies late in the month after hitting a 20-year high.  Just as in the U.S., the value sectors of both the EAFE and EM indices outperformed the growth sectors.  The energy sector, with a double-digit return, was the top performing sector in the EAFE index.  The information technology sector was the top performing sector in the EM index.  Consumer staples had the lowest return in the EAFE index while communication services was the laggard in the EM index.  In developed international markets, the euro area index was the best performing regional index.  The Pacific ex Japan index was the only regional index to post a negative return hurt by declining commodity prices.  Among emerging markets, the Latin America index rebounded sharply from the prior month and posted a return of over 8%.  Chile was the primary driver of the Latin America index return with a double-digit gain as that country made progress on forming a new government.  The Europe and Middle East index was the weakest performing regional index dragged down by negative returns for Turkey, Egypt, and Greece.

The Bloomberg U.S. Aggregate Bond index posted its first positive monthly return in 2022 in May.  The index had a return of 0.6% for the month.  All sectors of the bond market except the longest time to maturity Treasury bond and Treasury inflation protection bond indices generated a positive return.  The municipal bond index had the best return for the month as demand increased in the sector.  In mid-month, the benchmark 10-year Treasury bond yield moved up to over 3% for the first time since 2019 on expectations for aggressive rate hikes from the Fed.  However, the yield fell back again as concerns that high inflation and increasing interest rates will slow economic growth lifted demand for the safety of Treasury bonds.  The 10-year Treasury bond yield was 2.85% at the end of the month.  Expectations for central bank rate hikes caused bond yields outside the U.S. to rise as well.  For example, the German 10-year government bond reached 1% for the first time since 2015.

The commodity index continued to be the performance leader with a return of 1.5% but returns for individual commodities were mixed.  Only the energy related sub-indices posted a positive return for the month.  The energy sub-index had a return of 10% reflecting higher oil and natural gas prices.  Oil prices rose since oil inventories remain tight as the summer driving season begins in the U.S., the European Union agreed to phase out 90% of imports of Russian oil and gas, and China talked of beginning to ease the COVID related lockdowns of Shanghai and other industrial cities.  The price of West Texas Intermediate crude oil (WTI) was $114.38 at the end of May up from $104.59 at the end of April.  The price of gold was down as higher interest rates dampened demand for the metal.  Concerns that high inflation rates around the world will slow economic activity and weaken demand pushed industrial metals and agricultural commodity prices lower.

After months of declining prices, the selling pressure may ease as valuations for many stocks and bonds may have reached oversold levels.  However, inflation, supply chain issues, and the path of central bank interest rate policy remain sources of uncertainty for market participants and therefore, volatility in financial markets is still likely in reaction to news on these topics.

We continue to have a neutral view on growth relative to value preferring to have exposure to sectors benefiting from longer-term secular growth trends along with some exposure to cyclicality.  Our short-term tactical recommendations within the equity allocation are to overweight U.S. equities, underweight international developed equities, and equal weight emerging market equities relative to long-term strategic targets.  The underweight to international developed equities is because that index is likely to continue to face currency impact headwinds.  The U.S. dollar is likely to continue to strengthen relative to the euro given the higher risk to European economic growth from the Russia/Ukraine war impacts and due to the interest rate differential since the U.S. has begun its monetary tightening cycle while the European Central Bank is keeping rates steady for now.  Within our fixed income recommendation, we continue to favor short to intermediate maturities.  We continue to recommend an underweight allocation to hedge funds.  We recommend keeping at least a year of cash reserves to avoid having to raise cash during a sell-off period.

The statistical information contained in this commentary has been compiled from publicly available sources and is presented to you for your review and for discussion purposes only.  The information contained in this commentary represents the opinion of the author(s) as of its date and is subject to change at any time due to market or economic conditions.  These comments do not constitute a recommendation to purchase, sell or hold any security, and should not be construed as investment advice or to predict future performance.  Past performance does not guarantee future results.

The statistical information contained in this commentary was derived from sources that Vogel Consulting, LLC believes are reliable, and such information has not been independently verified by Vogel.  Russell Investment Group is the source and owner of the trademarks, service marks and copyrights related to the Russell Indexes.  Russell® is a trademark of the Russell Investment Group.  An index is not managed and is unavailable for direct investment.

The Build Back Better Act has been approved by the House of Representatives and is now being reviewed by the Senate.

Items to Consider in a Marital Agreement